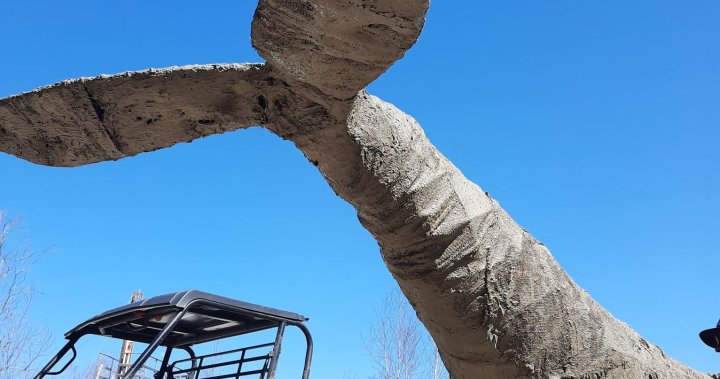 
The endangered North Atlantic right whale is being brought to life in the form of a six-metre “fillable” sculpture.

Project SculptShore is the brainchild of Eveline Hipson and Elizabeth Wile and is a piece of art that will be used to help clean up Nova Scotia shorelines this summer and bring awareness to the endangered species.

“(It) is a giant 20-foot baby whale sculpture that we’ll be taking to different events and shoreline cleanups and filling with ocean debris and things that may have caused the whale’s entanglement,” Wile tells Global News, adding that the sculpture will be modelled after the actual calf of Snow Cone, a North Atlantic right whale that got entangled in fishing rope last year.

“It does have a message to it, you are helping create thought-provoking art, because these whales are endangered for a reason. We are trying to bring information and awareness to things that are actually solving it,” Wile said, citing a program in the Maritimes trying to get fishers interested in ropeless fishing gear.

Hipson and Wile met through the Canadian Conservation Corps, which is a three-stage program with the Canadian Wildlife Federation. The sculpture is part of the third stage of the program, in which participants complete a community initiative. The pair partnered with local artists Nicole and Bernd Krebes of BernArt Maze in Lunenberg County to create the sculpture, which Wile said was a “natural fit,” as the artists already work with recycled and found material.

“It was quite cool, actually, that we are the ones who are going to build the whale. We like being involved in the project because we are really environmentally conscientious,” said Nicole Krebes.

“We are trying to get as much waste out of the landfill, which is recyclable, and it’s fun to create art out of it.”

The pair brought in Hawaii-based sculptor Jarrett Phillips to help with the project, who they’ve worked with in the past. Phillips said it was an opportunity he simply couldn’t pass up.

“To come out and, one, use my art to share with others, but to bring awareness to the Atlantic right whales, and kind of join the two together and put my art into use in future projects,” said Phillips.

The artists began working on the project on Sunday and have been going full-steam ahead since.

“We started early in the morning, worked 12- to 14-hour days, every single day, and right now we’ve expedited our sculpting process also so we can do it a little bit faster and efficient.”

The goal is to have it finished within the week and ready to roll out by next month.

The first North Atlantic right whale was spotted in Canadian waters last week as the population of approximately 336 migrates up the shore.

“We had a relatively good year last year in terms of birth of new whales, and also no death in our region, so that’s very positive,” said Boris Worm, a Dalhousie University professor of marine biology, adding that population numbers are still “extremely low” and they remain the most critically endangered species in the region, with fewer than 100 breeding females left in existence.

“And so the species is at great risk, and any mortality needs to be avoided in order to save this species from extinction.”

The two leading causes of mortality to the right whale population are fishing gear entanglement and ship strikes, said Worm, adding that new research shows that ships of any size can fatally injure the whales.

“I think in order to save this species we really need all hands on deck in our region,” said Worm.

“That doesn’t just include the fishing and shipping sector, that includes everybody. So, shoreline cleanups, for example, are a great help. Any type of rope that can be cleaned up is of help in this case. Anyone who sights a whale should report it to, for example, the Marine Animal Response Society that keeps track of the whereabouts of these whales, so we have all the information we need to keep this whale safe.”

Those behind Project SculptShore hope they can be part of the solution, too.

“We want the people to come out to our cleanups and feel like they’re being empowered and are making a difference,” said Wile.

“That’s something that we need to get on and start connecting people with this animal in order to make it an issue that we can all solve.”

Wile said the hope is to have the sculpture on the Halifax Waterfront by June 1, which is the start of Oceans Week in Halifax.