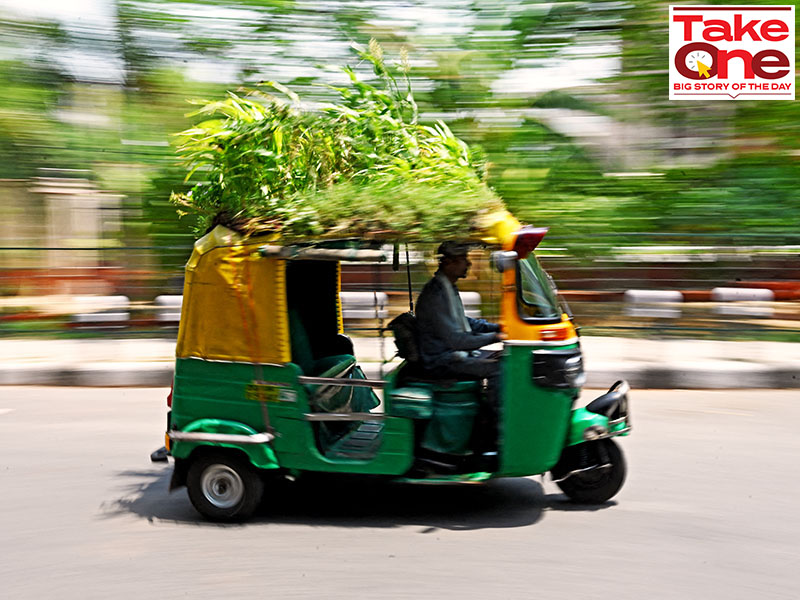 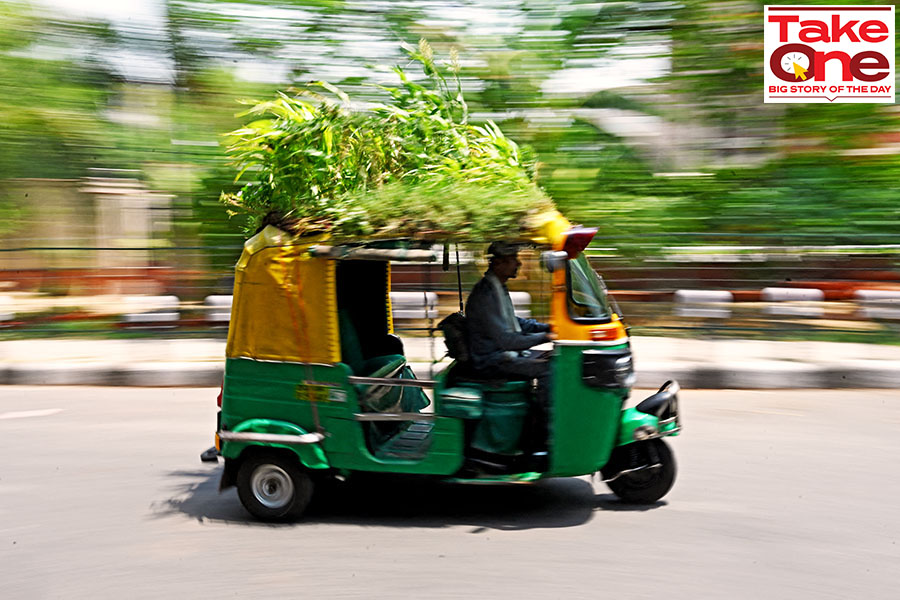 Autorickshaw driver Mahender Kumar drives his vehicle with a ‘garden’ on its roof, in New Delhi on May 2, 2022. Yellow and green autorickshaws are ubiquitous on New Delhi’s roads but Mahendra Kumar’s vehicle stands out—it has a garden on its roof aimed at keeping passengers cool during the searing summer season. Image: Money Sharma/ AFP

Outside my Mumbai window, a pair of sunbirds flashes in and out of the red-flowering Sita-Ashoka tree I had planted to replace a fallen gulmohar a decade ago. The gulmohar was one of eight exotic trees we lost on our tiny patch of roadside, and I mourned its spectacular beauty when it fell.

Green cover is recognised as essential to human health and well-being; urban greening is an important mitigation measure to slow climate change. But the right type of vegetation is crucial. Though all trees are beautiful, there is a special beauty to those local species which belong.

Palas trees ‘flame of the forest’ in the jungles of Central India are no less beautiful than a chinar tree in Himalayan Kashmir; wild ginger in the Western Ghats is as beautiful as wild roses in Himachal Pradesh or orchids in Sikkim. Each is suited perfectly to its own natural ecosystem and flourishes without human intervention.

Ordinary people in Mumbai have demonstrated their love of the natural in their years’-long struggle to save the forests of Aarey. Campaign leaders of the Save Aarey Movement include women and young people and even Maharashtra’s young Environment Minister Aaditya Thackeray, a passionate environment lover himself.
Ashok Kothari, former president of the National Society of the Friends of the Trees, who gave me the Sita-Ashoka sapling, said, “Replanting a lost tree is good. All trees absorb carbon and most foster birds and animals and increase urban biodiversity. But, unlike the exotics like gulmohar, indigenous trees like the Sita-Ashoka will flourish here for hundreds of years.”
The English ‘discovered’ the gulmohar in Madagascar in the 19th century. Its flaming orange once defined summer In Mumbai. But the gulmohar’s beauty is short-lived. Naturalised to a completely different climate and suited to dry, deciduous forests, gulmohar and other exotic trees fall in large numbers in the monsoon wind and rain. Sometimes they damage property and even endanger human life.

Other exotic trees like the eucalyptus, native to Australia and beloved of the koala bear which is endemic there, are inhospitable to local birds and animals in India.

In the concrete jungles of our rapidly growing Indian cities, more greenery is better. However, not all urban greenery is created equal. Our own wealth of incomparable plants and animals found nowhere else in the world is the most beautiful. After all, there’s no place like home.

Click here to see Forbes India’s comprehensive coverage on the Covid-19 situation and its impact on life, business and the economy​

Check out our end of season subscription discounts with a Moneycontrol pro subscription absolutely free. Use code EOSO2021. Click here for details.