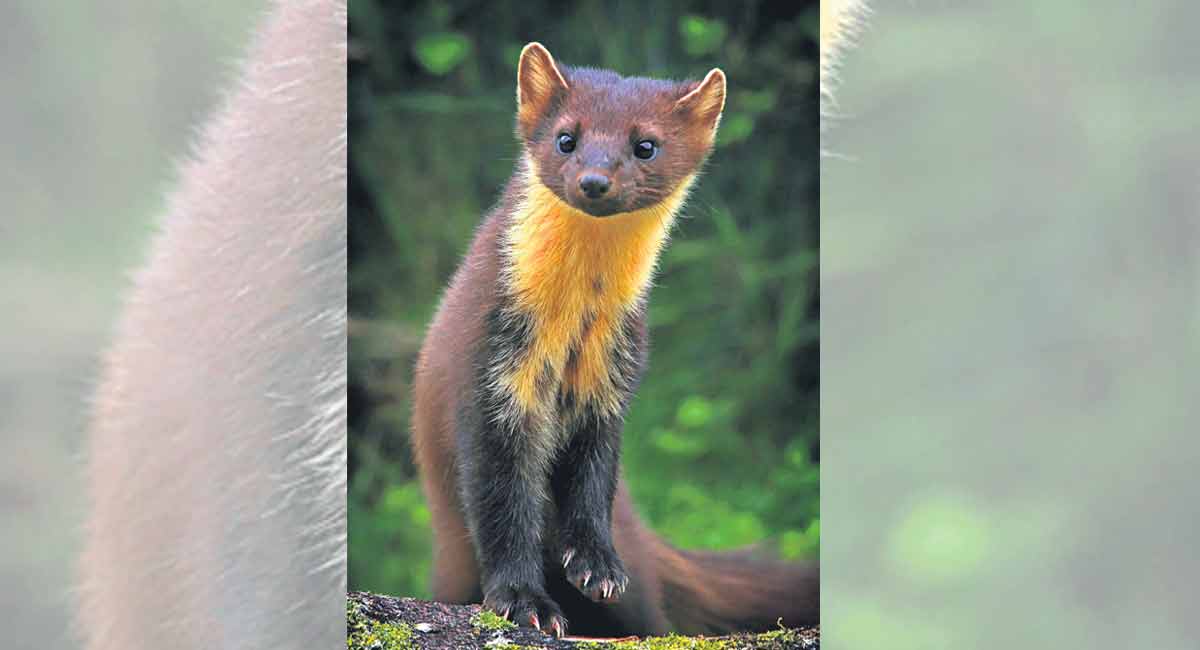 Hyderabad: India is the world’s 8th most biodiverse region. Our country encompasses a wide range of biomes: desert, high mountains, highlands, tropical and temperate forests, swamplands, plains, grasslands, areas surrounding rivers, as well as an island archipelago. It hosts four biodiversity hotspots: the Himalayas, the Western Ghats, the Indo-Burma region and Sundaland. These hotspots have numerous endemic species. Here are some of the rare and exotic wildlife species native to India.

Lion-tailed macaques live in tropical rainforests throughout southern India. Only the Western Ghats mountains are known to make up their habitat. Usually, they are found alongside deciduous trees and can be observed at elevations of up to 4921.3 feet.

Listed as Endangered under the IUCN list, the population of these species is 3,000–3,500. The expected maximum life expectancy in the wild is around 20 years.

The Nilgiri marten is the only marten species native to southern India. It lives in the hills of the Nilgiris and parts of the Western Ghats. They live in evergreen forests and montane forest-grassland mosaics. They also occur in tea, acacia, coffee, cardamom, and wattle plantations.
With only around 1,000 members left it is listed as Vulnerable on the IUCN Red List.

The Asiatic lion is surviving today only in India. Since the 20th century, its range has been restricted to Gir National Park and the surrounding areas in the State of Gujarat. Historically, it inhabited much of the Middle East to northern India.

There are only several hundred Asiatic lions in the wild. On the IUCN Red List, it is listed as Endangered due to its small population size and area of occupancy.

The sangai is an endemic subspecies of Eld’s deer found only in Manipur. It is also the State animal of Manipur. Also called the brow-antlered deer or the dancing deer, it lives in the marshy wetland in the Keibul Lamjao National Park, the only floating park in the world.

Listed as an Endangered species by the IUCN, the park is home to only 260 sangai.

The Indian rhino or greater one-horned rhinoceros is a rhinoceros species native to the Indian subcontinent. The extent and quality of the rhino’s most important habitat, the alluvial Terai-Duar savanna and grasslands and riverine forest, is considered to be in decline due to human and livestock encroachment.
It is listed as Vulnerable on the IUCN Red List, as populations is estimated to be 3,588 individuals and restricted to less than 20,000 square km.

The blackbuck, also known as the Indian antelope, is an antelope native to mainly India. During the 20th century, blackbuck numbers declined sharply due to excessive hunting, deforestation and habitat degradation.

In protected areas such as the Gundy National Park, IIT-Madras campus, Tamil Nadu’s Point Calimere and Vellanadu Sanctuaries, and parts of Haryana and Rajasthan, their population is at 25,000.

The pygmy hog is a suid native to alluvial grasslands in the foothills of the Himalayas at elevations of up to 300 metres. The only known population lives in Northwest Bengal, and Assam. As the population is estimated at less than 250 mature individuals, it is listed as Endangered on the IUCN Red List.

The Malabar large-spotted civet, also known as the Malabar civet, is a viverrid endemic to the Western Ghats. It has a dark mark on the cheek, large transverse dark marks on the back and sides, and two obliquely transverse dark lines on the neck.

It is listed as Critically Endangered on the IUCN Red List as the population is estimated to number fewer than 250 mature individuals.