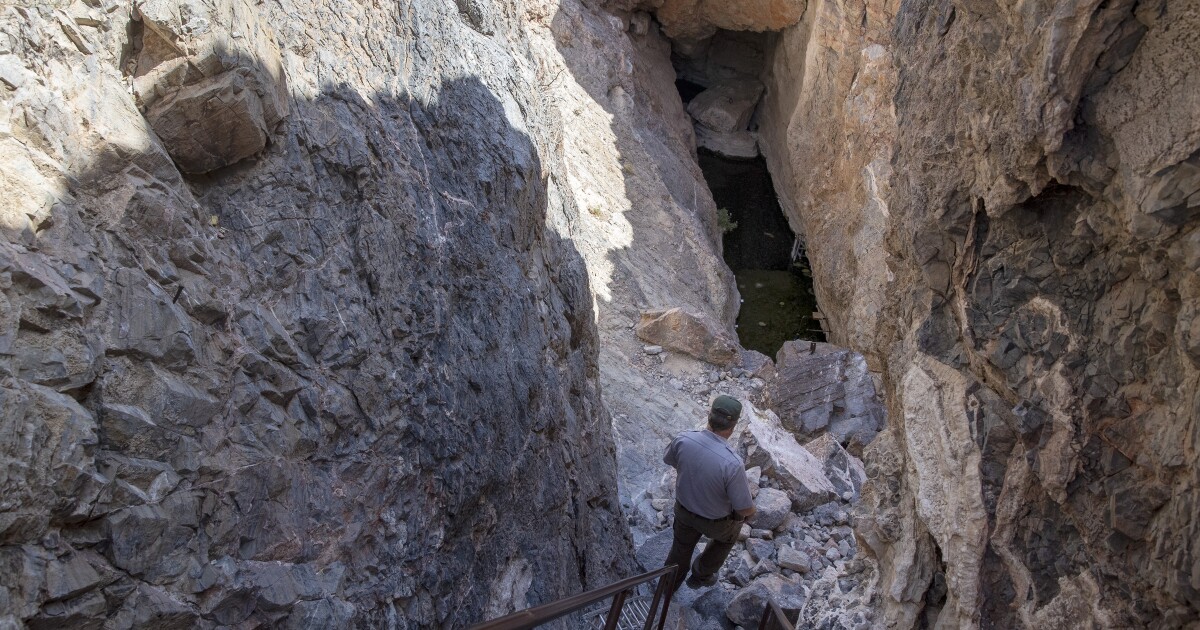 How the Devil’s Hole pupfish has survived for centuries in a spa-like cistern cloistered by a barren rock mountain in Death Valley National Park remains a biological mystery.

The world’s rarest, most inbred fish clings to existence in the smallest geographic range of any vertebrate: the shallow end of an oxygen-deprived pool 10 feet wide, 70 feet long and more than 500 feet deep.

In early 2013, its numbers plunged to 35, and biologists feared the species long regarded as a symbol of the desert conservation movement would be gone within a year.

But since then, the fish has paddled back from the brink, reaching a total population — in the wild and in captivity — of about 475 this spring, which is the height of the breeding season.

“It gives me goose bumps knowing that their numbers have risen,” said Kevin Wilson, aquatic ecologist for Death Valley National Park. As he gazed into the exposed aquifer that has been their home since perhaps the end of the Ice Age, scores of the inch-long iridescent blue fish were browsing lazily, or nipping at each other’s tails.

The ranks of Devil’s Hole pupfish have swelled to numbers high enough, Wilson said, to attempt the previously unthinkable: collecting samples of gut contents, fin clippings and tissue from live specimens for DNA sequencing. That information could help boost survival rates with management strategies that take diseases and complex genetic traits into account.

Such procedures were out of the question when the population was spiraling toward extinction. As a result, laboratory studies relied on putrefied tissue samples obtained from dead pupfish collected by National Park Service staff.

The prospect of providing answers to old mysteries makes the bumper crop of pupfish even more gratifying, Wilson said.

Among basic questions that remain unresolved: Exactly how and when did the fish end up in the pool, about 90 miles northwest of Las Vegas?

With a lifespan of 12 months and the lowest genetic diversity ever documented in the wild, what are its chances of surviving continuing threats from flash floods, earthquakes and the Mojave Desert’s changing climate?

Within 15 minutes of an earthquake somewhere in the world, waves as high as 6 feet tall wreak havoc upon the fish’s isolated domain.
A 2015 genetic study led by Christopher Martin, a professor at UC Berkeley specializing in the origins of biodiversity, referenced previous research suggesting that the probability of Devil’s Hole pupfish extinction within 50 years exceeded 80%.

“It’s exciting to see that this fish is doing well and not going to go extinct in a few years,” Martin said.

“We want to know as much as we possibly can about them,” he added. “So, as their numbers improve in the wild and in the facility, we can begin to think about raising a colony in the laboratory.”

Michael Schwemm, a senior fish biologist for the U.S. Fish and Wildlife Service, agrees. A pupfish revival, he said, “allows more opportunity for study and to explore new management options.”

Human interactions with wild Devil’s Hole pupfish are restricted by a strategic management plan developed by wildlife authorities. Under it, intrusive research would only be allowed if the population reaches 300 or more for three consecutive years.

“It may be time to adjust those rules,” Wilson said.

Despite a decades-long rescue effort however, the Devil’s Hole pupfish lives a solitary life in the turquoise waters of a subterranean fissure at the bottom of a limestone depression that makes protecting it a challenge.

An ancient 23-square-yard slab of rock that juts out into the pool, just a few feet below the surface, is key to its survival. The fish spawn on the slab, which is covered with its primary source of food, thin meadows of green algae.

Females lay their eggs in the geothermically heated pool that has been a constant 93 degrees, which is approaching the upper physiological limit for the species.

In 1952, President Harry S. Truman had the unique fish and its pocket ecology added to Death Valley as a protective measure.

The Devil’s Hole pupfish thrived until the late 1960s, when the water level and the numbers of fish began to fall precipitously because of irrigation pumping.

The population crash triggered a classic environmental clash between conservationists, who wanted to stop the pumping to save the fish, and locals who placed a higher value on economic growth.

Two popular bumper stickers at the time declared “Save the Pupfish” and “Kill the Pupfish.”

But the pupfish’s troubles were far from over.

Subsequent decades saw a gradual decline in population and the pupfish crisis of Sept. 11, 2004: Empty fish traps had been stacked by researchers on dry land, but a flash flood sent them tumbling into the pool. The traps ended up on the shelf with 80 expired fish in them.

Later, a trespassing incident led to the arrests of three men on felony charges in connection with a drunken rampage at Devil’s Hole, where a pupfish was found dead. They left behind plenty of evidence: beer cans, underwear, vomit, a cell phone and a wallet.

In 2013, a panic set in when it seemed extinction was imminent. Wildlife authorities installed clumps of aquarium plants where babies could hide from predatory adults.

In a collaborative effort involving the U.S. Fish and Wildlife Service, the National Park Service and the Nevada Department of Wildlife, biologists collected a batch of Devil’s Hole pupfish eggs and took them to the newly constructed Ash Meadows Fish Conservation Facility nearby.

Their goal was to establish a captive colony of the fish in the facility, which includes laboratory aquariums and a $4.5-million 100,000-gallon tank built as a replica of the natural rock tub.

In the meantime, Devil’s Hole pupfish in the wild still face serious problems due to their precarious life cycle and the environmental extremes that visit their hellish habitat.

“If this fish went extinct on my watch,” said Wilson, “I’d be haunted for the rest of my life by this question: “What didn’t I do?”