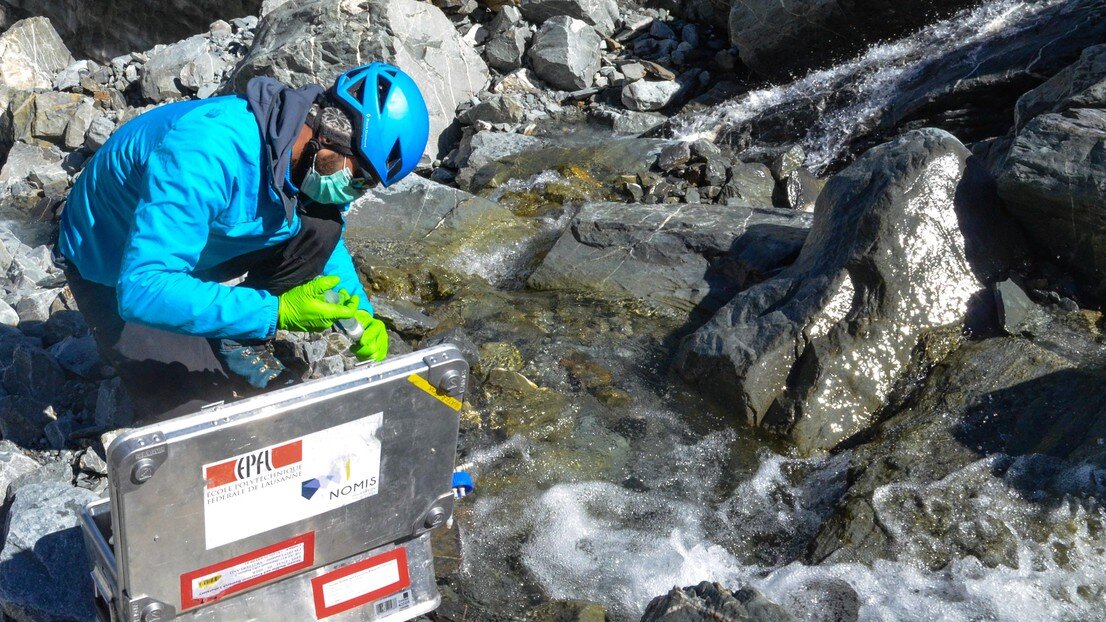 
According to two recent studies carried out as part of the Vanishing Glaciers Project, the ecosystems of glacier-fed streams are undergoing profound change around the world. That could have major repercussions on the food chain and the natural carbon cycle.

The ecosystems of glacier-fed streams have survived nutrient-poor and harsh environmental conditions over the course of thousands of years, yet they are now being transformed by climate change at unprecedented pace. That’s the conclusion of two studies published by scientists at EPFL’s River Ecosystems Laboratory (RIVER), which is part of EPFL’s School of Architecture, Civil and Environmental Engineering (ENAC). The studies were carried out in collaboration with the Luxembourg Center for Systems Biomedicine (LCSB) of the University of Luxembourg and King Abdullah University of Science and Technology. The first study highlights the diversity and adaptive strategies of the microbiome in glacier-fed streams, while the second reveals that the decomposition of organic matter in glacier-fed streams is accelerating and the microbiome structure is changing as glaciers shrink. As organic matter is decomposed at a higher rate, glacier-fed streams may become more important to the natural carbon cycle.

From green oasis to forests

Climate change is making the spring and fall seasons in glacier-fed streams last longer. According to the first study, published in Nature Communications, this shift has major repercussions on the ecosystem’s microbiome, which until now has been akin to a “green oasis” during short periods in spring and fall. In the future, the microbiome could turn into something more like a “forest.” “These seasons are important ecological ‘windows of opportunity’ in glacier-fed streams with less harsh environmental conditions. This allows primary producers to proliferate, and they form the energy basis of the microbial food chain,” says Prof. Tom Battin, the head of RIVER and the corresponding author for both publications.

In addition to this discovery, the study sheds new light on what has previously been a black box: the microbiome inside these ecosystems. The scientists now have a better understanding of how the different microorganisms compete or help each other survive in such a nutrient-poor environment with alternating periods of freezing, melting and strong UV radiation.

The scientists also unraveled potential metabolic interactions between algae and bacteria, and showed that biofilms can recycle feed streams internally. This appears to be an important adaptation to survive in an ecosystem that’s poor in energy. “Scientists in our field tend to call biofilms ‘slimy megacities,’ since they are home to millions of microbial residents encapsulated in slime and attached to rocks,” says Battin. “We were able to observe how the different species work together to survive.” Other crucial discoveries made by the RIVER team were an unexpectedly rich virome and genomic features that could explain how bacteria are able to shield themselves against glacial temperatures.

In the second study, appearing in Global Change Biology, the scientists found that organic matter across 101 glacier-fed streams worldwide is decomposed more rapidly as glaciers shrink. Concomitantly, they were able to relate this ecosystem process to distinct components of the microbiome. “We can expect the food chain in glacier-fed streams to become greener in the future as primary production becomes more important,” says Battin. “With this change, some microbial species may disappear, others will thrive, and there will be a shift along the entire food chain.” The bottom line of this study is that, as glaciers shrink, their streams may become more important natural sources of CO2 in the atmosphere.

This research was made possible by the Vanishing Glaciers Project—a four-year project based at EPFL and funded by The NOMIS Foundation. Under this project, scientists at RIVER began sampling glacier-fed streams around the world in 2018 with the aim of deciphering the biodiversity in these vanishing ecosystems. “Our unique effort, which combines intense expeditions with genomic analyses, made us the first to systematically study the microbiome of these ecosystems, which are now changing as the glaciers melt,” says Battin.

The Vanishing Glaciers expedition will soon draw to an end, making its last stop this summer in Alaska. The scientists have analyzed only 20% of the data they’ve collected so far from over 150 glacier-fed streams worldwide. Future analyses will investigate precisely how the microbiome is being altered—and what the broader ramifications are.

Scientists set out to explore microbial life in glacier streams