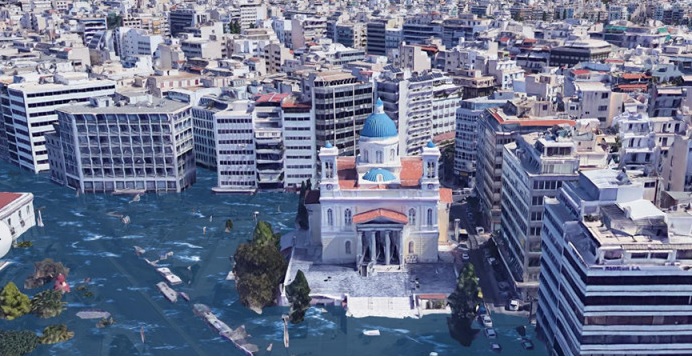 
Climate change models created by Climate Central, an independent organization of top scientists and journalists, show the devastation that rising sea levels could cause on coastal cities, including those in Greece, such as Piraeus and Thessaloniki.

The models were created based off the findings of a recent research paper written by scientists from Climate Central in collaboration with researchers from Princeton University and the Potsdam Institute for Climate Impact Research in Germany.

The paper, like the projections, compares the future if we continue our current path of warming the planet without implementing substantial changes to reduce emissions to the status of the Earth if we take immediate steps to cut yearly emissions in half by 2030.

Coastal cities such as Piraeus, Thessaloniki could be under water due to climate change

The striking images show the disastrous impact of climate change on coastal cities, depicting what cities could look like in a few decades if we keep up the trend of the global temperature rising by three degrees Celsius.

On a positive note, however, the projections allow users to compare the worst-case scenario to a model of the same city if the world takes immediate measures to cut emissions, reducing rising global temperatures to one and a half degrees Celsius, rather than three.

The projections show the drastic impact that rising water levels could have on some of the world’s largest coastal cities.

According to Climate Central, if we do not take immediate measures to cut emissions, 50 cities across the world will “need to mount globally unprecedented defenses” against rising water levels or “lose most of their populated areas.”

Although the negative impacts of global warming may seem inevitable, Climate Central contends that such a dystopian future can be avoided if countries pledge to cut emissions and save the planet.

The organization notes that if countries included in the Paris Agreement meet the most ambitious goals included in the pact, the expected level of sea rise will be reduced to half, allowing “nations to avoid building untested defenses” or abandon “many coastal megacities.”

According to climate scientists, the rising sea levels—due to global warming of three degrees Celsius—could flood land that is occupied by over 800 million people, or 10 percent of the world’s total population.

This effect of climate change could wipe out countless small island nations, and Asian countries will be particularly affected by rising sea levels.

Climate Central contends that countries in Asia “make up eight of the top ten most at-risk large nations.” A rise in sea levels could impact the lives of over 600 million people in Asia alone.

China, India, Vietnam, and Indonesia are all amongst the top five countries that will be most affected by rising sea levels. Shockingly, these countries have “added the most new coal-burning capacity from 2015-2019,” according to Climate Central.

In China alone, 43 million people live on land that will likely be completely submerged in water by the end of this century if the world warms by three degrees Celsius, which is our current path in terms of climate change.

By creating these visual tools, Climate Central hopes to illustrate not only the drastic, destructive effects of climate change but also the potential to save the planet if we take drastic measures now.