Chile’s first complete ichthyosaur recovered from a glacier in Patagonia 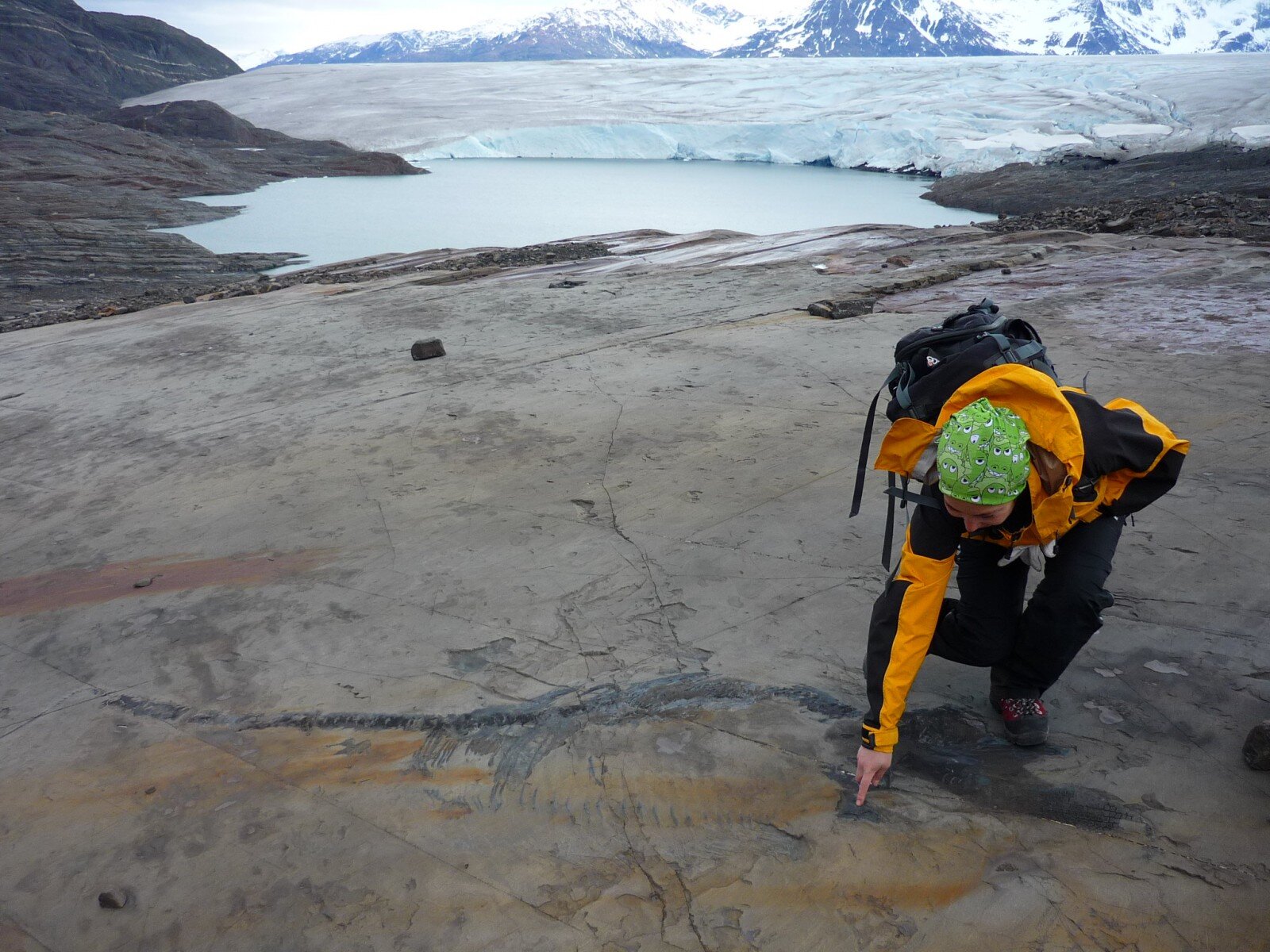 
The fossilized remains of Chile’s first complete ichthyosaur have been unearthed from a melting glacier deep in the Patagonia area of the South American country.

In an expedition led by the University of Magallanes (UMAG) in the Tyndall Glacier area of Chilean Patagonia during March and April 2022, within the boundaries of the Torres del Paine National Park, the intact remains were delicately collected using a helicopter.

Nicknamed Fiona, the ichthyosaur is a 4-meter-long pregnant female, containing several embryos that was initially discovered in 2009 by Magellanic paleontologist and researcher at the GAIA Antarctic Research Center, UMAG, Dr. Judith Pardo-Pérez. Given the remote nature of the find, requiring a 10-hour-hike or horse ride to reach the site, collecting this vitally important specimen was no easy task. It was only made possible through funding provided by the Chilean National Agency for Research and Development (ANID).

The expedition lasted an intense 31 days and was led by Dr. Pardo-Pérez, who is the first female paleontologist to lead a major expedition in Patagonia. The complex logistics, the difficulties of camping and moving around in a rocky area with wildlife including puma, and the extreme weather conditions made this journey an almost titanic challenge.

The exceptional ichthyosaur is the only pregnant female of Valanginian-Hauterivian age (between 129 and 139 million years old from the Early Cretaceous) recorded and extracted on the planet. “At four meters long, complete, and with embryos in gestation, the excavation will help to provide information on its species, on the paleobiology of embryonic development, and on a disease that affected it during its lifetime,” said Dr. Pardo-Perez Pérez, who also reports that, in addition to the ichthyosaur milestone, 23 new specimens have been discovered during this latest campaign, making it, according to Pardo-Perez, the most abundant and best-preserved early Cretaceous ichthyosaur deposit in the world.

“The results of the expedition met all expectations, and even more than expected,” says the scientist, specifying that, from these fossil records, “we hope to obtain results on the diversity, disparity and paleobiology of the ichthyosaurs of the Tyndall Glacier locality, establish degrees of bone maturity and ecological niches to evaluate possible dietary transitions that occurred throughout their evolution and that could help to establish paleobiogeographical connections with ichthyosaurs from other latitudes.”

Dr. Pardo-Pérez has visited the Tyndall fossil site more than 10 times since the initial discovery in 1997 and completed a Ph.D. on the ichthyosaurs found in the area. Given the magnitude of the proposed research objectives of this trip, the complexities associated with the terrain, as well as the multidisciplinary nature of the study and science, an international team of collaborators with unique skill sets were involved from across Chile, Argentina and also Germany and the U.K.

Part of the team was also Dr. Dean Lomax, a paleontologist and a Visiting Scientist at The University of Manchester, who has studied thousands of ichthyosaurs and who recently led the excavation of the Rutland ichthyosaur, the most complete skeleton of a large prehistoric reptile ever found in the U.K. Whilst assisting on-site, Lomax found new specimens including the best-preserved skull of an ichthyosaur found there to date, belonging to a young juvenile.

“The fact that these incredible ichthyosaurs are so well preserved in an extreme environment, revealed by a retreating glacier, is unlike anywhere else in the world. The considerable number of ichthyosaurs found in the area, including complete skeletons of adults, juveniles, and newborns provides a unique window into the past. The international collaboration helps to share this exceptional ichthyosaur graveyard with the world and, to a large extent, to promote science.”

Lomax continued: “The weather was so extreme that we could not get to the ichthyosaur site every day and had to remain in camp. On those days when the team could reach the site, they documented the ichthyosaurs and other fossils and discovered new specimens. Amazingly, on average, two ichthyosaurs were found every day.”

Excavation of Fiona was led by paleontological technician Jonatan Kaluza from Fundación de Historia Natural Félix de Azara and CONICET (Argentina) and biologist and paleontological excavator Héctor Ortiz from the Chilean Antarctic Institute and the University of Chile. They spent the entire length of the trip sleeping inside tents by the ichthyosaur, in front of the Tyndall Glacier. To combat the 90 kph winds, heavy rain and snow, a hangar was built over Fiona so that the team could continue to work through the elements, using machinery and excavation tools for the extremely hard terrain.

Battling the challenging elements, the excavation was incredibly tough. “The rock of the outcrop is so hard that it cannot be excavated with a lump hammer, chisel and brush, and we had to cut, drill and break blocks with diamond and high caliber tools. We were only two people who made glacier camp and, in a month of field work, we managed to get the most complete ichthyosaur from the southern tip of America to the world in two helicopter flights,” said Ortiz.

Kaluza added: “This is the hardest excavation I have been in my entire career. This fossil locality in Chilean Patagonia is exceptional and is extremely important to keep the support of the Chilean government to continue researching and protecting this valuable patrimony.”

Another key member of the team was Dr. Erin Maxwell, curator of the collection of marine reptiles and fossil fishes of the State Museum of Natural History in Stuttgart (Germany), an expert world-renowned for her dozens of scientific articles on ichthyosaurs.

For Dr. Pardo-Pérez, having experts from the State Museum of Natural History in Stuttgart, Germany, was key. This institution is one of the museums with the longest historical tradition in the study of ichthyosaurs since the 19th century and has a collection of more than 500 specimens. Dr. Maxwell added that these records can be used to compare with the new findings from Chilean Patagonia, since “We do not have many marine reptile fossils from this time period worldwide (~130–140 million years ago), and the ones we have are from Europe,” she said. Based on this, she emphasized that “the Tyndall locality is very important to fill a gap in our knowledge about the types and general diversity of species that inhabited the ocean in the southern hemisphere, especially in temperate to polar latitudes.”

Following the dramatic scenes of a helicopter lifting Fiona from her ancient seabed, now high in the Tyndall Glacier, which was once deep underwater the team had to dismantle camp and return to load the ichthyosaur onto a truck. Support was provided by the Mayor of the Municipality of Torres del Paine, Anahí Cárdenas, who facilitated the use of a crane truck to transport the camp and excavation materials to the Torres del Paine National Park and then the excavated specimen to the Río Seco Museum of Natural History in Punta Arenas (approximately 400 kilometers).

Fiona will now be prepared in the paleontology laboratory of the Río Seco Natural History Museum in Punta Arenas, where it will be temporarily stored for later exhibition. In this respect and as local counterpart of the project, the director of the Museum, Miguel Cáceres, said that this alliance “allows us to open a new line of temporary work on a large scale such as geology and paleontology, and also a space for collaboration that helps us, without doubt, to give meaning to this purpose of resignifying natural history in the Region of Magallanes.”

Dr. Pardo-Pérez believes that the first thing following the excavation is to implement in situ protection methods to prevent the deterioration of the fossils. “We have almost a hundred ichthyosaurs in the Tyndall Glacier fossil deposit and many of them, unfortunately, will never be excavated, due to the difficulty of access, being in risk areas (cliff edge), and lack of funds etc. The ichthyosaurs that will not be excavated need protection and consolidation in situ, as the erosion to which they are being subjected on a daily basis is destroying them.”

All of the above, added to the continuity of palaeontological research in the sector, reaffirms, for the researcher, the need to have a permanent shelter that serves as a place to live during the days of the campaign and as a laboratory for study and analysis during the weeks in which the excavation is being carried out. “This type of scientific infrastructure would put us at the forefront worldwide in terms of palaeontological excavations in remote areas and would give us more safety from the extreme location,” says Pardo-Perez.

Provided by
University of Manchester

Citation:
Chile’s first complete ichthyosaur recovered from a glacier in Patagonia (2022, May 10)
retrieved 10 May 2022
from https://phys.org/news/2022-05-chile-ichthyosaur-recovered-glacier-patagonia.html

Delta-8 THC is one of the most talked-about...
Read more
Previous articleHow to Fix An Overheating Vape Pen – 2022 Guide
Next articleTalia Resnick: Exploring the Roles of Companies in Combating Climate Change