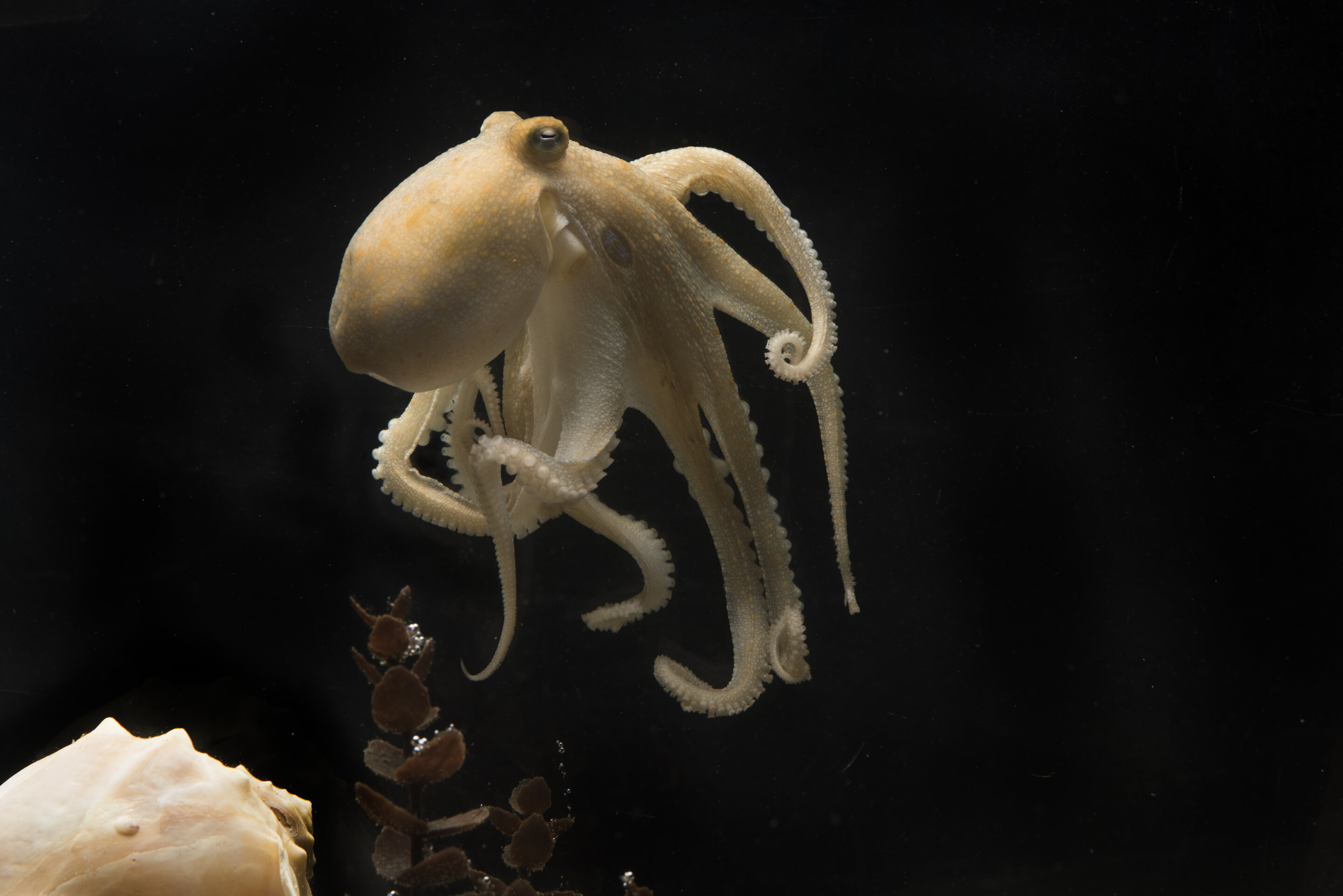 
For all their uncanny intelligence and seemingly supernatural abilities to change color and regenerate limbs, octopuses often suffer a tragic death. After a mother octopus lays a clutch of eggs, she quits eating and wastes away; by the time the eggs hatch, she is dead. Some females in captivity even seem to speed up this process intentionally, mutilating themselves and twisting their arms into a tangled mess.

The source of this bizarre maternal behavior seems to be the optic gland, an organ similar to the pituitary gland in mammals. For years, just how this gland triggered the gruesome death spiral was unclear, but a new study by researchers from the University of Chicago, the University of Washington, and the University of Illinois Chicago (UIC) shows that the optic gland in maternal octopuses undergoes a massive shift in cholesterol metabolism, resulting in dramatic changes in the steroid hormones produced. Alterations in cholesterol metabolism in other animals, including humans, can have serious consequences on longevity and behavior, and the study’s authors believe this reveals important similarities in the functions of these steroids across the animal kingdom, in soft-bodied cephalopods and vertebrates alike.

“We know cholesterol is important from a dietary perspective, and within different signaling systems in the body too,” said Z. Yan Wang, Ph.D., Assistant Professor of Psychology and Biology at the University of Washington and lead author of the study. “It’s involved in everything from the flexibility of cell membranes to production of stress hormones, but it was a big surprise to see it play a part in this life cycle process as well.”

In 1977, Brandeis University psychologist Jerome Wodinsky showed that if he removed the optic gland from Caribbean two-spot octopus (Octopus hummelincki) mothers, they abandoned their clutch of eggs, resumed feeding, and lived for months longer. At the time, cephalopod biologists concluded that the optic gland must secrete some kind of “self-destruct” hormone, but just what it was and how it worked was unclear.

In 2018, Wang, then a graduate student at the University of Chicago, and Clifton Ragsdale, Ph.D., Professor of Neurobiology at UChicago, sequenced the RNA transcriptome of the optic gland from several California two-spot octopuses (Octopus bimaculoides) at different stages of their maternal decline. RNA carries instructions from DNA about how to produce proteins, so sequencing it is a good way to understand the activity of genes and what’s going on inside cells at a given time. As the animals began to fast and decline, there were higher levels of activity in genes that metabolize cholesterol and produce steroids, the first time the optic gland had been linked to something other than reproduction.

In the new paper, published this week in Current Biology, Wang and Ragsdale took their studies a step further and analyzed the chemicals produced by the maternal octopus optic gland. They worked with Stephanie Cologna, Ph.D., Associate Professor of Chemistry at UIC, and Melissa Pergande, a former graduate student at UIC, who specialize in mass spectometry, a technique that analyzes the chemical composition of biological samples. Since Wang’s previous research pointed to increased activity in the genes that produce steroids, they focused on cholesterol and related molecules in the optic gland tissue.

They found three different pathways involved in increasing steroid hormones after reproduction. One of them produces pregnenolone and progesterone, two steroids commonly associated with pregnancy. Another produces maternal cholestanoids or intermediate components for bile acids, and the third produces increased levels of 7-dehydrocholesterol (7-DHC), a precursor to cholesterol.

The new research shows that the maternal optic gland undergoes dramatic changes to produce more pregnenolone and progesterone, maternal cholestanoids, and 7-DHC during the stages of decline. While the pregnancy hormones are to be expected, this is the first time anything like the components for bile acids or cholesterol have been linked to the maternal octopus death spiral.

Some of these same pathways are used for producing cholesterol in mice and other mammals as well. “There are two major pathways for creating cholesterol that are known from studies in rodents, and now there’s evidence from our study that those pathways are probably present in octopuses as well,” Wang said. “It was really exciting to see the similarity across such different animals.”

Elevated levels of 7-DHC are toxic in humans; It’s the hallmark of a genetic disorder called Smith-Lemli-Opitz syndrome (SLOS), which is caused by a mutation in the enzyme that converts 7-DHC to cholesterol. Children with the disorder suffer from severe developmental and behavioral consequences, including repetitive self-injury reminiscent of octopus end-of-life behaviors.

The findings suggest that disruption of the cholesterol production process in octopuses has grave consequences, just as it does in other animals. So far, what Wang and her team have discovered is another step in the octopus self-destruct sequence, signaling more changes downstream that ultimately lead to the mother’s odd behavior and demise.

“What’s striking is that they go through this progression of changes where they seem to go crazy right before they die,” Ragsdale said. “Maybe that’s two processes, maybe it’s three or four. Now, we have at least three apparently independent pathways to steroid hormones that could account for the multiplicity of effects that these animals show.”

This summer, Wang will be studying at the UChicago affiliated Marine Biological Laboratory (MBL) as part of the Grass Fellowship, before she joins the faculty at the University of Washington. A major draw of MBL is their extensive cephalopod research program, in particular a new model animal, the lesser Pacific striped octopus (Ocotopus chierchiae). Among other useful features like its small, manageable size, the striped octopus doesn’t self-destruct after breeding like the animals Wang and Ragsdale have been studying so far. Wang plans to examine the striped octopus’s optic glands and compare them to her new results to look for clues as to how it avoids the tragic octopus death spiral.

“The optic gland exists in all other soft-bodied cephalopods, and they have such divergent reproductive strategies,” she said. “It’s such a tiny gland and it’s underappreciated, and I think it’s going to be exciting to explore how it contributes to such a great diversity of life history trajectories in cephalopods.”

The study is titled “Steroid hormones of the octopus self-destruct system.”

The grim, final days of a mother octopus

Citation:
Changes in cholesterol production lead to tragic octopus death spiral (2022, May 12)
retrieved 12 May 2022
from https://phys.org/news/2022-05-cholesterol-production-tragic-octopus-death.html

"We are very pleased to have obtained this...
Read more
Previous articleScientists find a ‘yellow brick road’ in Pacific Ocean, the lost City of Atlantis?
Next articleTree death contributes to climate change more than you’d think