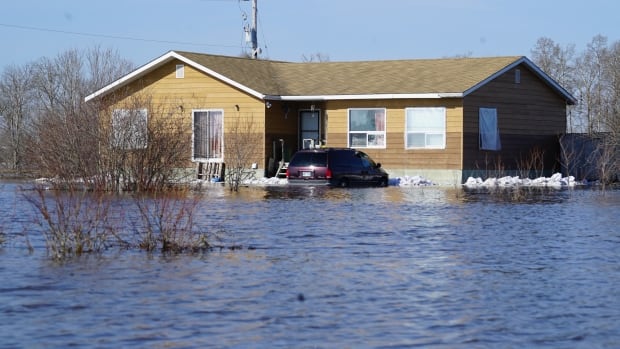 
As spring flooding devastates communities in Western and Northern Canada, the federal government is calling on Canadians to offer their ideas for adapting to climate-related disasters.

Ottawa is in the final stages of completing the country’s first-ever national adaptation strategy. On Monday, it launched a public engagement process to hear from Canadians on how communities and businesses will live with and minimize the impacts of floods, heat domes, wildfires and similar disasters.

In a news release, Environment Minister Steven Guilbeault called adapting to climate change “a two-front war” and said businesses and communities must “play both offence and defence” to lower emissions and find ways to lessen the impact of global warming.

“We must reduce carbon pollution and we must prepare for the impacts of climate change,” Guilbeault said.

More recently, record flooding in central and southern Manitoba has put the issue of climate adaptation front and centre.

The government is framing the launch of its three-month online consultation with these disasters in mind.

Guilbeault said the adaptation strategy could consider measurable targets — by, for example, estimating how many fewer Canadians would be affected by flooding or forest fires due to identified measures.

A discussion paper released today as well suggests some things that could be included in the government’s adaptation plan: relocating people from high-flood-risk areas; standardizing the emergency alert system, expanding the network of first responders investing in equipment and designing roads, railways and other infrastructure to be more resilient.

Although the discussion paper doesn’t go into as much detail, it points to a role for the health care system and for nature-based climate solutions, such as tree planting or restoring vegetation. There’s also no mention of how much it will cost to make the changes required, or whether the public or private sector would absorb the costs.

The Insurance Bureau of Canada, a trade association that represents the industry, estimates that it would cost the Canadian economy around $5 billion annually to deal with severe weather damage driven by climate change.

Craig Stewart, IBC’s vice-president of climate change and federal issues, said those costs would have to shared by insurers, banks, property owners and governments.

“The challenge is too large for governments to take on for themselves,” said Stewart. “It doesn’t have to be borne by governments.”

Consultations end on July 15, and the government intends to release its final strategy in the fall.

“A good national adaptation strategy will identify the concrete things that need to be done,” said Ryan Ness, the director of adaptation research at the Canadian Climate Institute, which researches climate policy.

Ness said the strategy should identify flooding as one of Canada’s greatest climate change-related risks and one of the areas requiring immediate investment.

Such a strategy would lay out a “game plan,” he said, that could include information on which communities face the highest risk of flooding and which will face more risk in future because of climate change, while offering specific solutions.