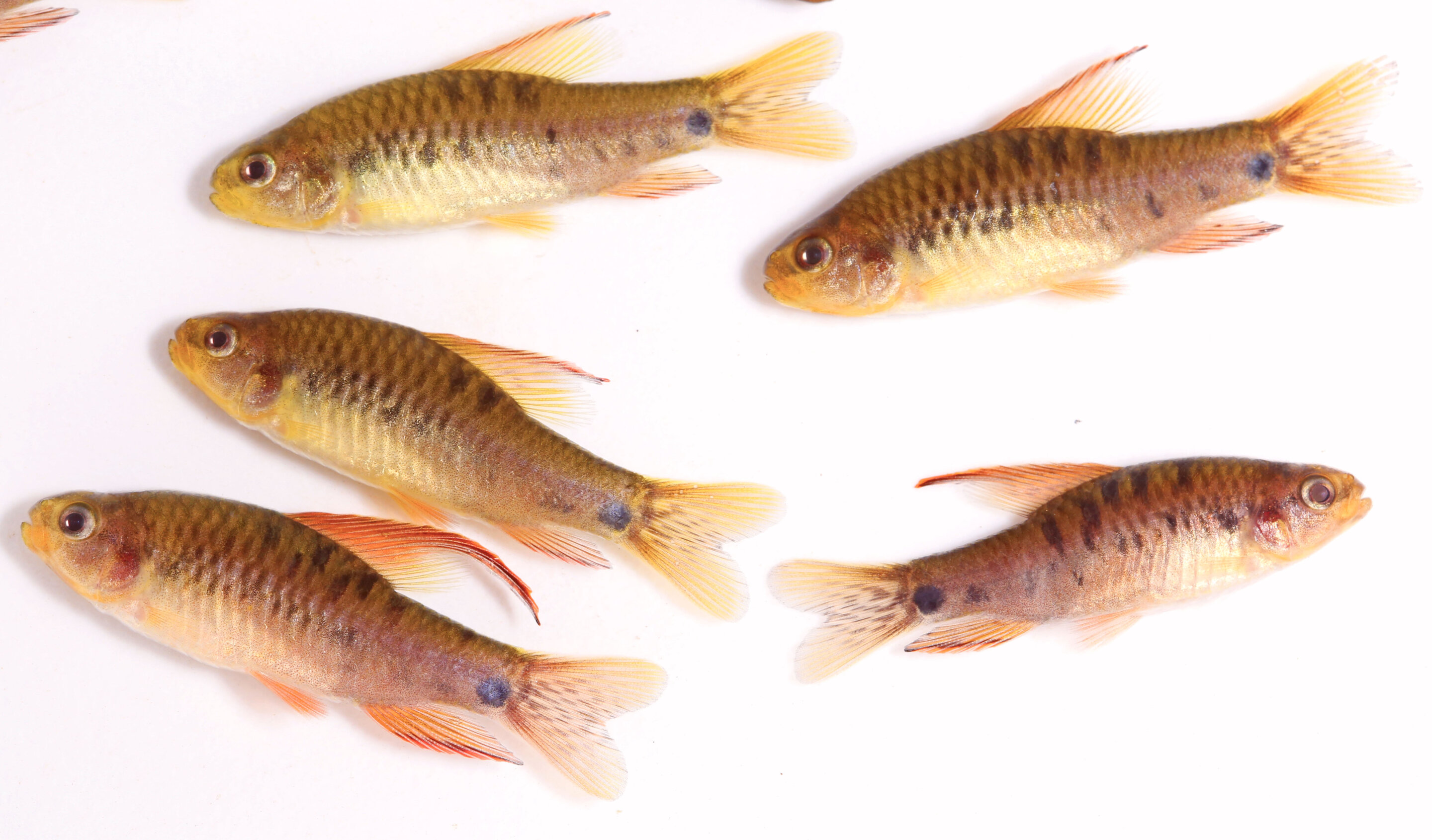 
Smithsonian’s National Museum of Natural History researcher Murilo Pastana and his colleagues have discovered and described two new species of Amazonian fish—one with striking red-orange fins and the other so small it is technically considered a miniature fish species—in a paper published today, May 16, in the Zoological Journal of the Linnean Society.

Both species inhabit waters located at the bleeding edge of human encroachment into the Amazon rainforest roughly 25 miles north of the Brazilian city of Apuí. Pastana and his co-authors, Willian Ohara with the Federal University of Rondônia and Priscila Camelier with the Federal University of Bahia, said that ongoing deforestation in the region places these roughly inch-long fish, part of a group known colloquially as the South American darters, in imminent danger of extinction. In particular, the more colorful of the two species, Poecilocharax callipterus, is at risk because its known range is limited to a single stream comprising roughly 1.5 square miles of habitat.

“It was exciting to find new species,” Pastana said. “But in the field, we saw the forest on fire, logging trucks carrying out huge trees, and cleared patches turned into cattle pasture. This made us feel a lot of urgency to document these species and publish this paper as quickly as possible.”

As a Brazilian-born scientist, Pastana is passionate about preserving the country’s biological heritage, and his hope is that naming and describing these species might motivate the Brazilian government to protect and conserve these newly discovered, endangered fishes.

The small subfamily to which these previously unknown fish species belong is also highly desirable in the aquarium hobbyist market. Pastana said that the exotic aquarium fish trade could pose yet another threat to these two new species even as scientists are first formally identifying them and learning of their existence.

The expeditions that uncovered these new freshwater species took place between 2015 and 2016. Pastana said the broad goal of these forays into the Brazilian Amazon was to search out the still unknown biological treasures of the many waterways in the Madeira River Basin, the richest river basin in the world in terms of fish biodiversity according to a 2019 estimate.

“We went to sample places that have never been visited by scientists,” Pastana said. “This area is really important because this is one of the frontiers where deforestation is moving north—the border between new cities and native forest.”

The Apuí region where these scientific surveys took place sits at number two on a recent list of Brazilian municipalities with the highest deforestation rates. Ironically, the same roads that facilitate the region’s accelerating loss of habitat also facilitated access to formerly unreachable streams, ponds and tributaries for Pastana and his colleagues.

So, in 2015 and 2016 Pastana and others camped along a road called AM-174 and collected fish using nets, traps and other methods. All the specimens were photographed, cataloged and preserved for further study back at the Museum of Zoology, University of São Paulo.

One of these specimens has vivid red-orange fins and a distinctive dark spot just in front of its tail. This fish stood out immediately as a new species, Pastana said. The fish, which has now been named P. callipterus, inhabits the margins of what scientists call a black water stream, so named because its waters are stained the color of coffee by tannins leached from fallen leaves. Males of the species have even more intense coloration and sport dorsal fins that can exceed half their body length, which averages just over an inch. Despite targeted efforts to seek out this species in the surrounding area on the 2016 return trip, Pastana and his colleagues were only able to find P. callipterus in the stream in which it was first discovered.

Researchers encountered the second new species documented on these field expeditions among tangles of tree roots protruding from the banks of muddy watered streams—distinct from the relatively translucent, if darkly stained, black water streams. Given the scientific name P. rhizophilus for its love (phil) of roots (rhiz), this species is an amber yellow with males possessing dark streaks in their dorsal and anal fins. But perhaps the most distinctive quality of this new species is that it is so small that scientists consider it to be miniature, a designation given to any fish that is less than about an inch long when mature, Pastana said. He added that lab study revealed that in these three-quarter-inch-long fish, parts of the skeleton that are typically bone are instead made of cartilage.

Genetic investigations confirmed the evolutionary relationship of these two new closely related species and their relatives, bringing the total number of species in their small sub-family (Crenuchinae) to five. This is the first addition of a new species to the group in 57 years.

These fishes, Pastana said, are like works of art and “losing either of these species would be like losing priceless masterpieces.” Like masterworks from Monet or Picasso, each species is full of irreplaceable details that might bear some resemblance to other creatures on Earth but in concert are utterly unique. Extinction would cause all those details, wrought over millions of years of evolution, to blink out. “You’d lose everything about these species,” he said.