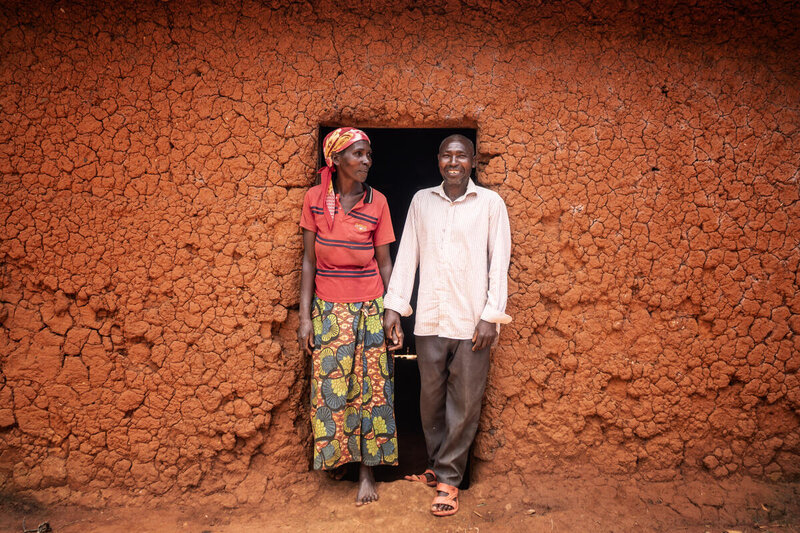 
Two decades ago, Jean Nkeramihigo and Francine Kanyana moved to the commune of Vumbi, in Kirundo, Burundi, in search of land so they could start their own farm and bring up a family.

At the time, agriculture was the main source of income for many in the area and the couple thought it would be easy to make ends meet. However, twenty years later, the couple’s life is different from what they hoped for. The reason for their plans’ disruption? The same one looming across the whole African continent: climate change.

Like other vulnerable families in Kirundo, Jean, Francine and their 12 children rely on humanitarian assistance and paid labour to survive, sometimes with only one meal per day in the evening. The couple were among the 40,000 vulnerable people assisted in April 2022 by the World Food Programme (WFP) to help them to meet their basic food needs.

“I felt so relieved when a local administrative officer told me that I was going to get food support from WFP. The rice, beans, vegetable oil and salt that we received are very helpful as it allows us to tackle food insecurity for the next few months while waiting for better days. I am grateful to WFP for the food they have provided us,” says Jean.

Recurrent drought in Jean and Francine’s province has compromised agricultural crops since 2005, leaving families in disarray, not knowing how to fill their daily food needs.

“When the dry season extends over a long period, it affects all our crops (beans, maize, sorghum) and we know that we will go hungry next season,” says Jean. Such a dire situation forces families like his to seek work in other provinces and in neighbouring countries like Rwanda and Tanzania.

“With WFP’s assistance, I can now take care of household activities because I no longer have to make long trips to neighbouring provinces to find fertile land to farm,” says Francine.

They not only receive food assistance. WFP also teaches families about how to tackle acute malnutrition – especially important in Kirundo province that has the highest levels in Burundi.

The country, the second poorest in the world by GDP, is land-locked at the centre of Africa, and its hilly topography makes it highly vulnerable to climate-related disasters. Heavy rains, floods, landslides and droughts are the most common shocks. In recent years, on top of recurrent droughts, excess rainfall has caused the waters of Lake Tanganyika to rise despite its 800 kilometres length, forcing thousands of people to displace.

The fight for resources only adds pressure to a country where 90% of the population rely on subsistence farming but where 38% of the land is heavily degraded.

This year, Burundi is heading for a record drought, but it is not the only country in Africa faced with this kind of challenge. The Sahel, which runs south of the Sahara desert, encompassing Burkina Faso, Chad, Mali, Mauritania and Niger, is currently experiencing some of its driest conditions in years. Hunger is expected to affect 10.5 million people in 2022, including more than a million teetering on the edge of starvation, in the five countries.

The Horn of Africa is currently enduring the worst drought in decades, which together with conflict, the economic effects of COVID-19 and the current spike in food and fuel prices, is putting countries such as Ethiopia, South Sudan and others at serious risk of famine. If humanitarian relief isn’t urgently received, the number of hungry people due to drought could reach 20 million people by the end of 2022. And this is happening in a year of unprecedented hunger needs across the world, with a war in Ukraine disrupting the global food chain and when resources have hit bottom.

The World Food Programme (WFP) requires US$21.5 billion to reach 147 million people in 2022. However, the gap between needs and funding is bigger than ever before.

Climate change is making extreme weather events more frequent and severe but WFP and other humanitarian agencies warn that focusing only on immediate disaster response is not the solution. For every dollar invested in protection and prevention, three dollars are saved in emergency response, and that´s why WFP combines emergency assistance programmes with long-term solutions in Burundi and many other countries across the continent.

In 2021, WFP assisted with food and cash 192,000 people displaced internally in Burundi, mainly due to climate change and plans to keep doing it in the next few years. In addition, WFP helped organize the government’s climate plans through activities implemented in Gitega, Karusi and Cankuzo provinces. Those will help the population be less dependent on food assistance and support their livelihoods through soil restoration, water harvesting and other activities such as tree seedlings and reforestation of bare areas that will make them more resilient to climate shocks.