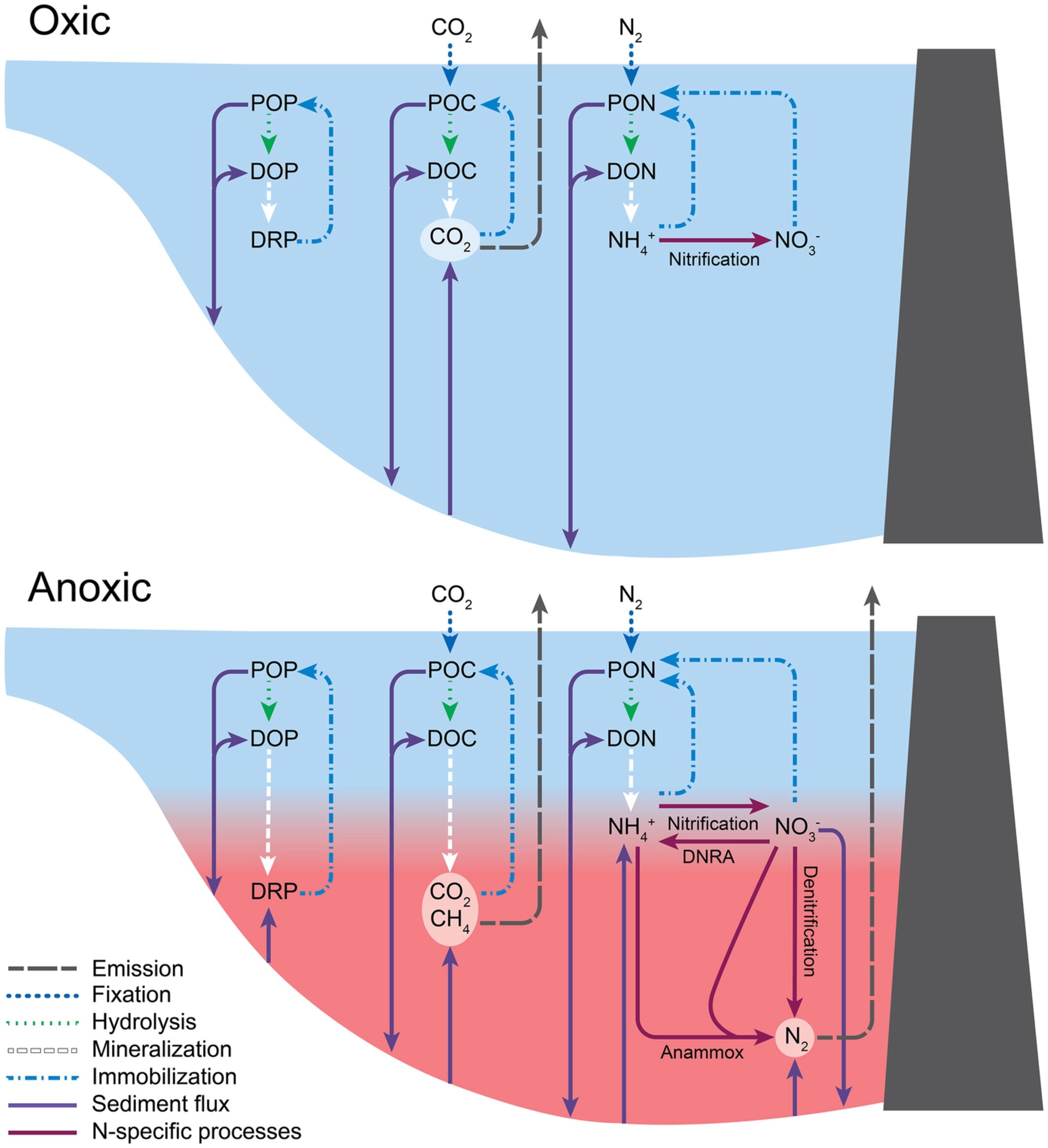 
Scientists have recently confirmed that the world’s lakes are rapidly losing oxygen. With a seven-year, whole-ecosystem study, a team of freshwater scientists at Virginia Tech has been one of the first to take the next step in asking: What does it mean for water quality that oxygen is declining globally?

Sticky with sediment, the bottom waters of lakes are more than their deepest, darkest layer. They bury massive portions of the carbon, nitrogen, and phosphorus found in runoff rolling in from the land. As one of nature’s critical nutrient sinks, lakes earn their recognition as “sentinels” of their surroundings, said freshwater scientist Cayelan Carey.

“We think of lakes as sentinels because they truly integrate all of the changes that happen on land,” said Carey, an associate professor of biological sciences in the Virginia Tech College of Science and an affiliated scientist with the Fralin Life Sciences Institute. “Lakes do this really great job of receiving and processing all of this carbon, nitrogen, and phosphorus, preventing them from going downstream and reaching the ocean.”

But that work could be dismantled by anoxia, the loss of oxygen availability, Carey’s team found in a study published this week in Global Change Biology. Dreaded by scientists for years and recently confirmed as widespread by data from hundreds of lakes, anoxia is sucking oxygen from the world’s fresh waters.

It’s a phenomenon linked to the warming of waters brought on by climate change and to excess pollutant runoff from land use. Warming waters diminish fresh water’s capacity to hold oxygen, while the breakdown of nutrients in runoff by freshwater microbes gobbles up oxygen.

In a seven-year field experiment that manipulated oxygen levels in the bottom waters of a nearby reservoir, Carey’s team found that with anoxic conditions came effects they had expected: the sediments release a lot of nutrients and carbon. But they weren’t as prepared for the extent of the changes. They observed the lake going from a sink—which retains more nutrients and carbon than it exports—to a source of nutrients downstream, starting a cycle in which anoxia in one lake could beget anoxia in another.

“I had no expectation that there would be this much change in water chemistry,” Carey said. “And to see it consistently and to see it over the seven years of the study—the effect of anoxia was multiple orders of magnitude greater than what I originally predicted.”

Making those discoveries relied on the team’s design of an experiment that was novel in a few ways. It had to be done at whole-ecosystem scale, conducted not just with samples tested in a lab or in small enclosures of a lake’s bottom waters, but with access to the whole body of water. Carey’s team did field experiment in the Falling Creek Reservoir in Vinton, Virginia, where team members manipulated oxygen levels in the lake’s bottom waters using an engineered oxygenation system that could withdraw water from the bottom, inject dissolved oxygen into it at super-saturated concentrations onshore, and return the oxygenated water to the bottom without altering water temperature.

Manipulating only the oxygen levels in bottom waters, thus disentangling the effects from those of changing temperature, is crucial to understanding anoxia’s impact, said Carey, a Roger Moore and Mojdeh Khatam-Moore Faculty Fellow in the College of Science. “By manipulating oxygen without altering temperature, we can understand and isolate what its effects will be. We can truly say that what we’re seeing is a result of a changing oxygen and not due to other extraneous factors happening in the lake.”

But analyzing anoxia’s effects doesn’t stop at upping or lowering oxygen levels and monitoring water chemistry. With a field experiment, there’s always data you need but can’t collect, Carey said. It’s difficult to sample and measure “those nitty-gritty sediment-water interactions” without disturbing them in the field. There’s also the issue of logistics: Carey couldn’t send someone to collect data every single day for seven summers.

So the team fed the data it had collected into a model Carey describes as a “video game of a lake,” which simulated those important but tricky interactions. “Underlying the video game were a bunch of equations we could manipulate to understand which processes were most important when the reservoir had low versus high oxygen levels,” she said.

The model also enabled the team to get data every hour. “That allowed us to be able to really understand how quickly the lake responded to changes in oxygen,” Carey said.

The researchers observed huge changes to the concentrations of nutrients released from bottom waters with anoxia, including a six-fold increase in nitrogen export. Over time, the lake went from a net sink of phosphorus and carbon to a net source of both nutrients to downstream water bodies.

“What we saw was that the lake was unable to do its important job of serving as this sink of carbon, nitrogen, and phosphorus, as it would have done if there was oxygen there,” Carey said. “The changes were really remarkable for all three of the elements individually, but we saw that in aggregate, the lake‘s ability to serve as this sink was really changing.”

All of that carbon, nitrogen, and phosphorus, once buried at the bottom, was not only released up into the water column—which potentially feeds toxic algal blooms, harms freshwater wildlife, and compromises reservoirs as drinking water sources—but the nutrients moved downstream, Carey explained. Herein lies the vicious cycle of anoxia begetting anoxia: As more nutrients reach other lakes, rivers, and streams, each waterbody’s microbes will consume more and more oxygen to break them down.

Knowing the severity of this impact should move us to act on land use, Carey believes. “Our study reveals this mechanism by which upstream lakes are harming downstream lakes, and if this is going on broadly, then we basically have to do everything we can to protect lakes from receiving even more phosphorus, fertilizers, and sediments,” she said. “I’m hoping we can light a fire with folks. These processes are happening that we didn’t even know about.”

Citation:
A vicious cycle of oxygen loss threatens water quality in lakes (2022, May 25)
retrieved 27 May 2022
from https://phys.org/news/2022-05-vicious-oxygen-loss-threatens-quality.html