5 things you should know about the UN Ocean Conference, a chance to save the planet’s largest ecosystem | 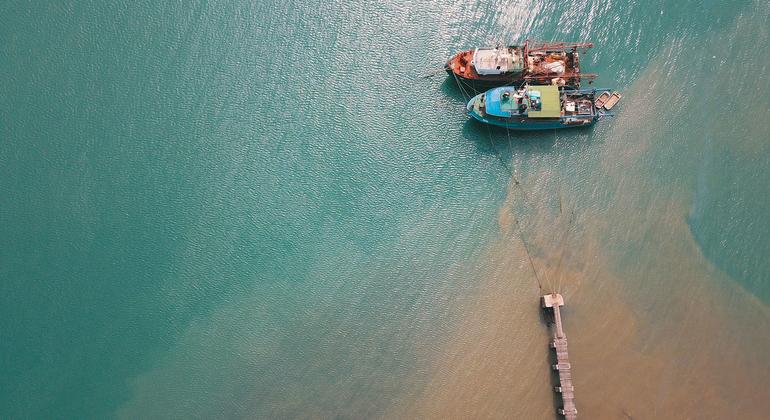 
With delegates from Member States, non-governmental organizations, and universities attending, as well as entrepreneurs looking for ways to sustainably develop the “Blue Economy”, there are hopes that this event, taking place in the Portuguese city of Lisbon between 27 June and 1 July, will mark a new era for the Ocean.

1. It’s time to focus on solutions

The first Conference, in 2017, was seen as a game changer in alerting the world to the Ocean’s problems. According to Peter Thomson, the UN Secretary-General’s Special Envoy for the Ocean, Lisbon “is going to be about providing solutions to those problems”.

The event is designed to provide a space for the international community to push for the adoption of innovative, science-based solutions for the sustainable management of the oceans, including combating water acidification, pollution, illegal fishing and loss of habitats and biodiversity.

This year’s conference will also determine the level of ambition for the United Nations Decade of Ocean Science for Sustainable Development (2021-2030). The Decade will be a major theme in the conference, and will be the subject of several important events, laying out the vision of a healthier, more sustainable Ocean.

The UN has set 10 ocean-related targets to be achieved over this decade, as part of the 2030 Agenda for Sustainable Development, the Organisation’s blueprint for a fairer future for people and the planet. They include action to prevent and reducing pollution and acidification, protecting ecosystems, regulating fisheries, and increasing scientific knowledge. At the conference, interactive dialogues will focus on how to address many of these issues.

The role of youth will be at the fore in Lisbon, with young entrepreneurs, working on innovative, science-based solutions to critical problems, an important part of the dialogue.

From 24 through 26 June, they will participate in the Youth and Innovation Forum, a platform aimed at helping young entrepreneurs and innovators to scale up their initiatives, projects and ideas, by providing professional training, and matchmaking with mentors, investors, the private sector, and government officials.

The forum will also include an “Innovathon,” where teams of five participants will work together to create and propose new ocean solutions.

2. The stakes are high

The Ocean provides us all with oxygen, food, and livelihoods. It nurtures unimaginable biodiversity, and directly supports human well-being, through food and energy resources.

Besides being a life source, the ocean stabilizes the climate and stores carbon, acting as a giant sink for greenhouse gases.

According to UN data, around 680 million people live in low-lying coastal zones, rising to around one billion by 2050.

Plus, latest analysis estimates that 40 million people will be employed by ocean-based industries by the end of this decade.

3. Spotlight on Kenya and Portugal

Although the Conference is taking place in Portugal, it is being co-hosted by Kenya, where 65 per cent of the coastal population lives in rural areas, engaging primarily in fisheries, agriculture, and mining for their livelihoods.

A local fisherman in Kenya who depends on fish for food and livelihood.

For Bernadette Loloju, a resident of Samburu County, Kenya, the ocean is important for her country’s people because it allows them to get many of the goods they need. “The ocean contains many living organisms including fish. It also gives us food. When we go to Mombasa city, we enjoy the beach and swim, adding to our happiness”.

The passion for the ocean is shared with Portugal, the largest coastal European Union Member State with some four million kilometers of continuous coastline, and as such, a country that plays a central role in the Atlantic basin.

“Our expectations for the UN Oceans Conference are that it will be a conference about action and not just about commitment”, says Catarina Grilo, Director of Conservation and Policy at Associação Natureza Portugal (ANP), a non-governmental organization working in line with the World Wildlife Fund (WWF). ANP runs several projects in the areas of marine protection, sustainable fisheries, and ocean conservancy.

“The previous conference in New York was a really good moment to raise awareness about the role of the oceans for humanity’s well-being. At the time we had a lot of voluntary commitments from Member States and non-state organizations, but now it’s time to move from words to actions”.

4. The ocean and the global climate are intrinsically linked

The ocean and global climate heavily influence one another in many ways. As the climate crisis continues to pose an existential threat, there are some key metrics scientists are watching closely.

According to the latest climate change report from the World Meteorological Organization (WMO) global mean sea levels increased at an average of 4.5 mm per year between 2013 and 2021, due to ice sheets melting at an increasing rate.

The ocean absorbs around 23 per cent of CO2 generated by human activity, and when it does, chemical reactions take place, acidifying the seawater. That puts marine environments at risk and, the more acidic the water becomes, the less CO2 it is able to absorb.

Samuel Collins, a project manager at the Oceano Azul Foundation, in Lisbon, believes that the conference will serve as a bridge to COP27, due to take place in Sharm El-Sheikh, Egypt this November.

“The ocean is fundamentally integral to climate. It houses 94 per cent of the living space on the planet. I could reel off statistics that shock us all.”, says the 27-year-old Scot.

“The reason why the products that we buy in the shop are so cheap is because shipping transports 90 per cent of the goods in our homes, so there are many reasons why we are connected to the ocean, whether you’re a landlocked country or not. There’s no living organism on earth that is unaffected by the Ocean”.

Different fish species swim in a marine protected area outside the coast of Malta.

We asked some experts – including Catarina Grilo and biologist Nuno Barros at ANP, as well as Sam Collins at Oceano Azul Foundation – what citizens can do to promote a sustainable blue economy, while waiting for decision-makers and world leaders to move into action. Here are some ideas that you can incorporate to your daily lives:

Beach clean-up at Praia da Poça, a popular little beach at the start of the Estoril – Cascais coast, in Portugal.

UN News will be in Lisbon to cover the Ocean Conference, so you can expect news stories, interviews, and features with experts, youth, and UN voices.

Look out for the latest updates on our page, and also on Twitter.