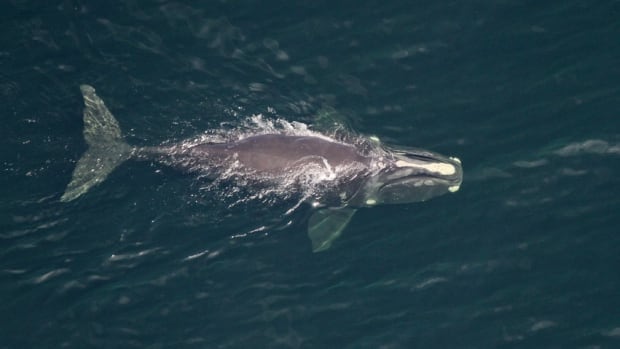 
The first North Atlantic right whale of the season has been spotted in Canadian waters, triggering a fishing closure in parts of the southern Gulf of St. Lawrence to protect the endangered species.

A surveillance aircraft spotted the whale in the Gulf, north of the Magdalen Islands, on Tuesday, the federal government announced Wednesday afternoon.

There is now a 15-day fishing closure in specific fishing grids in the southern Gulf, north of the islands, according to a news release issued by Fisheries and Oceans Canada and the Canadian Coast Guard.

Researchers estimate only 336 North Atlantic right whales are left in the world.

Fifteen calves were observed in the 2022 calving season in U.S. waters.

In March, the Canadian government announced its fishery and vessel management measures for the 2022 season to protect the endangered whales from entanglements and ship strikes as they migrate into Canadian waters.

These include seasonal and temporary fishing area closures in the Gulf of St. Lawrence, the Bay of Fundy and other “critical habitat areas” where whales have previously been sighted.

Under the rules, if a right whale is visually or acoustically detected, roughly 2,000 square kilometres around the location will be closed to non-tended fixed gear fisheries, including lobster and crab, for 15 days.

Two surveillance flights between Day 9 and 15 with no right whales being detected are required before an area can reopen to fishing.

If a right whale is detected in the closed area again during that period, the closure will be extended.

In the Bay of Fundy and critical habitats in the Roseway and Grand Manan basins, an extra 15 days will be added.

But in the Gulf of St. Lawrence, a season-long closure will be implemented; the area will remain closed until Nov. 15.

All fishing area closures will be posted online.

Transport Canada is also enforcing vessel traffic measures again this season, including speed restrictions for vessels over 13 metres long, throughout much of the Gulf.

In 2023, Fisheries and Oceans Canada will work with harvesters to help them switch to “whale-safe gear.”